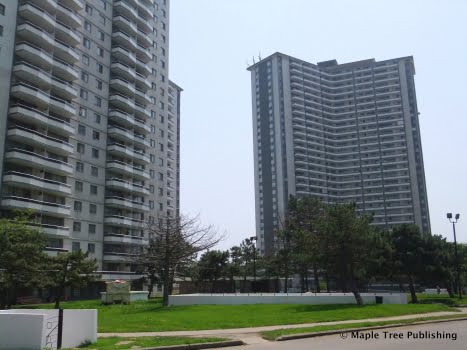 The Ontario Municipal Board (“OMB”) will hold a Prehearing Conference (the “Prehearing”) on the proposed North St. James Town high rise condominium development (the “Development”) next month. The SRRA Board of Directors encourages you to attend the Prehearing, scheduled for September 18, 2014 at 10:00 AM.

The Development, which includes two 45-storey towers, as well as 12-storey and 37-storey buildings between Sherbourne, Bloor, Parliament and Howard Streets, was approved by City Council in December of 2013. The Official Plan and Zoning By-law Amendments necessary for the Development to proceed have not yet been enacted, and therefore the developer, Lanterra Developments, has appealed the matter to the OMB.

While generally in favour of the area’s redevelopment, the South Rosedale Residents’ Association (“SRRA”) strongly opposes the form of Development as supported by City Planning Staff and approved by City Council. The SRRA will therefore seek official standing at the Prehearing and will be present at the September 18th meeting along with retained legal and planning professionals.

Among the SRRA’s concerns are the presence of a high wall of buildings along Bloor Street East, the shadowing of the adjacent Rosedale Valley Ravine and South Rosedale homes and most importantly, the addition more than 3,000 new residents to a distressed area already lacking in sufficient infrastructure, social amenities and adequate green space.

If you spoke at the Toronto and East York Community Council Meeting on the Development last Fall or made a written submission, you should by now have received written notification of the OMB Prehearing. If you did not, you can still seek standing as a participant in the OMB process. In either case, we strongly encourage your attendance and participation.

To do so, you must attend the September 18th Prehearing at 10:00 AM, to be held at the Ontario Municipal Board offices located at 655 Bay Street, 16th Floor, Toronto.

SRRA Board of Directors