A public meeting relating to the proposed development at Scrivener Square has been scheduled by the City of Toronto on November 27, 2017. The community consultation will be held in the evening at a time to be confirmed, at Stone Church, 45 Davenport Road. 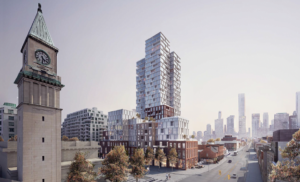 Before the Scrivener Square properties were sold to the current developer, DiamondCorp, the SRRA was instrumental in setting up an informal Working Committee of stakeholder groups that have long been involved in the planning and development of the site, in some cases going back over 30 years.

During this period, the members of the Committee have met on a frequent basis, including numerous meetings with DiamondCorp. Over the summer, informal without prejudice discussions resulted in the preparation of a new development proposal by DiamondCorp, with lower height, reduced density and a different configuration than the formal development application currently filed with the City.

While questions and clarifications remain, and changes may still be proposed, the consensus of the Working Committee is that this new proposal is a significant improvement over DiamondCorp’s initial plans. At the time of writing, the Board has not yet defined a position on the new proposal. 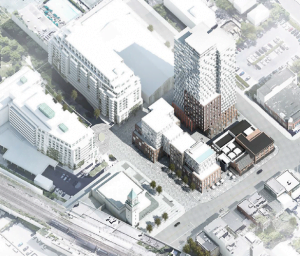 Discussions are continuing to determine the level of potential stakeholder support – on a non-binding basis – for a new design reflecting the basic principles contained in the new proposal. This would include a land exchange between DiamondCorp and the City of Toronto to facilitate the creation of a green open space area running along the north end of the proposed development, immediately to the south of the current Scrivener Road. Contrary to some reports, this configuration is not conditional upon the narrowing of Scrivener Road.

For more information on the application as currently filed with the City, click here.